The countries of the Levant are one reason why I decided to place a defined limit on the scope of the #FortressEarth Mapping Project. It's practically impossible to walk more than a few meters without tripping over an archaeological site, and if you go back far enough, just about every old city and settlement was fortified at one time or another. So having the limit of 1000 AD to 1945 is very helpful at making the project actually feasible. 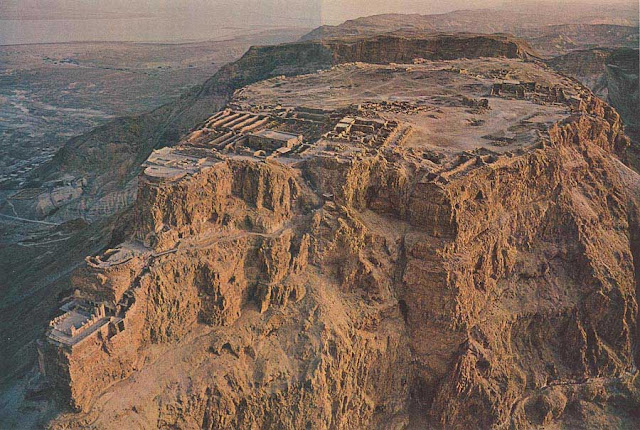 Before I get into things, for the purposes of the project, I've included as "Israel", the official state of Israel, the disputed Palestinian Territories (the West Bank and Gaza), and the occupied Golan Heights since all of the territories are under some level of Israeli control.


I've actually written about the ancient history of Israel for another blog of mine, but I didn't really touch on military history and I stopped at 614 AD. Without going into too much detail on the history of the area (since it is generally widely known), and because I want to get to the castles as quickly as possible, I'll just give this rundown of post-Roman history.

After the fall of Western Rome, the Byzantine successor-state retained its hold over the area from 390 to 634 AD. Conflicts with the rising Islamic world led to the loss of the territory to a series of caliphates (634-1099). The Crusader Period began in 1099 and lasted for nearly 200 years, coming to an end in 1291 (although the last Christian foothold in the Holy Land wouldn't be lost until 1303). Next came the Egyptian Malmuks who ruled from 1291 to 1517. Afterwards, the Ottoman Empire captured the area and held it until the end of World War I and the partition of the Empire. The modern state of Israel was born in 1948.

The conflicts of the Byzantines with the Sassanid Persians occurred in and around many ancient cities and strongholds. Conflicts between different Muslim factions and throughout the Crusader-era likewise happened in many of the same places. However, the time of the Crusades led to the construction of some of the largest and most impressive castles in the region. Despite its importance, Israel is one of the few countries/regions of the world without any star forts. I can only surmise that this is because the West's active attempts to retake the Holy Land ended before the 14th century and that Palestine was rather securely Ottoman throughout the main star fort-era. 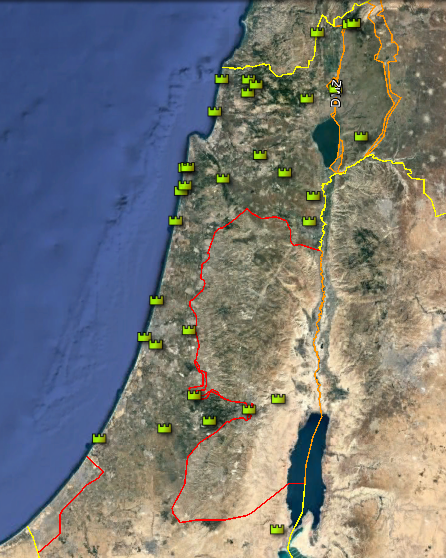 The Castles of Israel.

I was able to find 31 extant castles/fortifications, but I'd be willing to bet that there are more, particularly lesser known sites or ones that are in a severely ruined state. However, the US Congress passed a law in 1997 which limits satellite resolution over Israel (and the various territories). This limit is imposed on every commercial satellite company that is based in the US. The practical result of this is it's all but impossible to identify small sites like watchtowers or ruined castles or to tell them apart from the surrounding terrain.


With that, let's look at some fortifications! 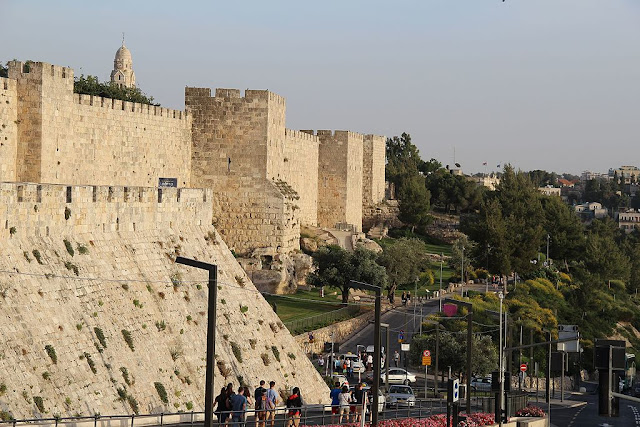 Section of the wall around Jerusalem. (Source: Wikimedia Commons)

The City of Jerusalem has been surrounded by stone walls for 3,000 years. Unfortunately, due to war after war (and occasional earthquakes), only scattered and buried archaeological remains of these walls still exist. The oldest large sections of wall that can still be seen above ground, date from the early period of the Herodian Dynasty (37 BC - 92 AD). The four kilometers of walls that still surround today's city are from the Ottoman Period, and were constructed between 1535-38. Their average height is 12 meters (just under 40 feet).


The next place I want to highlight is the fortress city of Acre (also known as Akko). 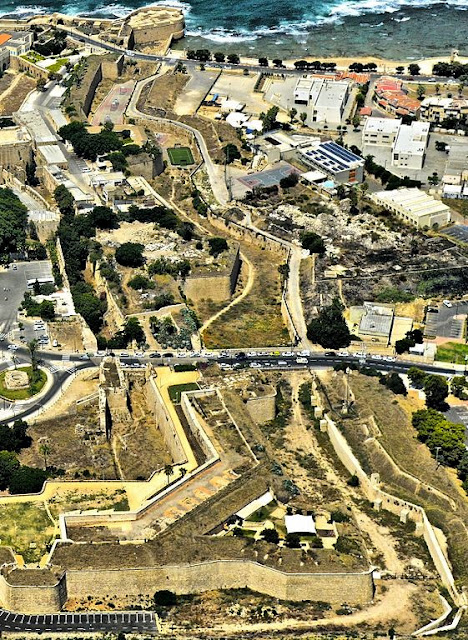 With over 5,000 years of history, Acre is one of the oldest continually inhabited cities in the world. Like Jerusalem, its system of walls stretch back for thousands of years. But like much in the Levant, the Crusader and Ottoman periods have left their enduring marks and are the legacy we see today.

After centuries as a regional Christian center, the city was given over to the Rashidun Caliphate in 638 following the defeat of the Byzantine army. The city thrived and became an important trading and naval post. Starting in 1100 during the First Crusade, after four years of siege, the city fell to King Baldwin I of Jerusalem. Acre's population around this time was 25,000, second only to Jerusalem, and its mighty walls remained standing. At the end of the Crusader Period, the city was captured by the Egyptian Mamluks in 1291. During this siege, the city walls were destroyed. By the end of the 16th century, only a few hundred people still lived inside the town.

In the late 1700s, the city's walls were rebuilt. Napoleon actually attempted to take the city in 1799 during his campaign to take Egypt and Syria from the Ottomans. Acre's walls held and its defenders gave Napoleon one of his few decisive defeats. The earlier walls range in height from 10 to 13 meters (33-43 feet), but are relatively thin at only 1.5 m (4.9 ft). A much more massive land wall (as seen in the picture) was constructed between 1800-14.


So far I've been talking about walled cities, so let's look at a fort and a castle.

Forts and castles can often be confused with one another as they're both fortified facilities, but there is a key distinction: a castle is a protected residence, whereas a fort is primarily a military site used to garrison troops and protect a certain area. 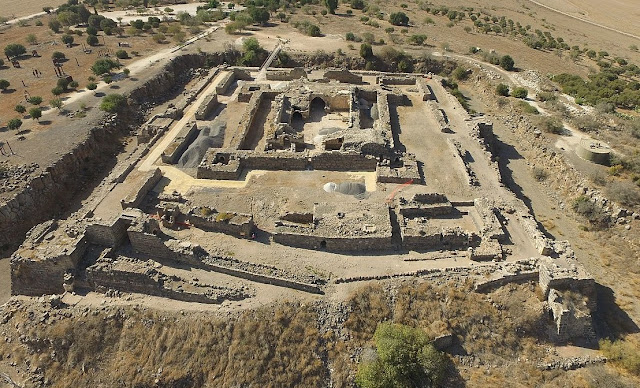 Belvoir was constructed by the Knights Hospitaller in 1168. Aside from its size, what makes Belvoir really interesting is its 'double-fort' design; a smaller inner fortress lies within the larger outer walls. This can be easily seen in the diagram below. 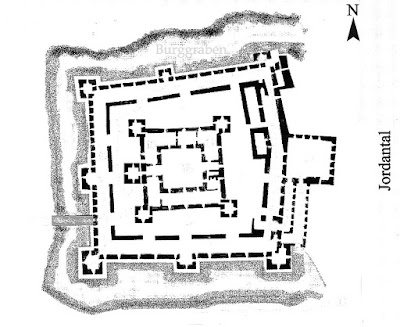 Only after an 18-month siege did the fortress fall to Saladin in 1189. What's impressive is that the fort wasn't actually taken, but was surrendered because all of the surrounding lands had already been captured and the defenders had no hope for rescue or breaking out. The fort was purposefully demolished by its Ayyubid rulers in 1219. The fortress has remained in that ruined state ever since, even despite being ceded to the Franks from 1241-63. Serious archaeology has only been occurring since 1963 to uncover the secrets of Israel's biggest fort. 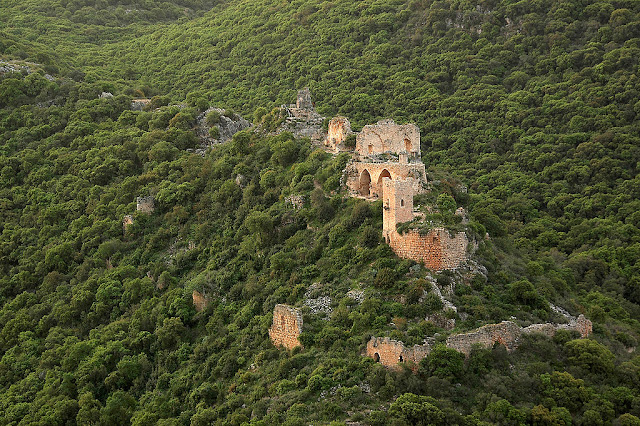 The final site I'll detail in this post is Montfort Castle, located in the north of Israel, about 6 km (3.7 miles) from the border with Lebanon.

Classified as a "spur castle" as it sits on a narrow ridge projecting off a mountain, Montfort Castle was built by members of the Teutonic Order on land that belonged to a wealthy French family in 1220 as the events of the Third Crusade (1189-92) meant that the land the castle sits above became more important. The castle was originally supposed to house members of the Order's administration, its treasury, and archives.

Despite the common understanding of the Crusader-era being one of Christian vs. Muslim, the Crusades themselves were full of factionalism and competing interests. The need to move the administration to such a high and remote location was spurred on by conflicts with other Christian groups like the Knights Hospitaller and Templar's.

The castle first came under Muslim attack in 1266 but was able withstand the assault. The castle eventually fell and was later abandoned completely in 1291 as the Teutonic Knights were forced to make their headquarters in Venice, Italy once the Crusader-era drew to a close.


To see all of the sites in Israel, here is a Google Map. You can download the map as a KML (Google Earth) file by opening the map in a new window, clicking the 'Options' button (3 dots) and hitting "export to KML".


As always, if there's an error or a missing place (that you have the exact location of), please let me know! Projects like Fortress Earth only work when people share their knowledge.