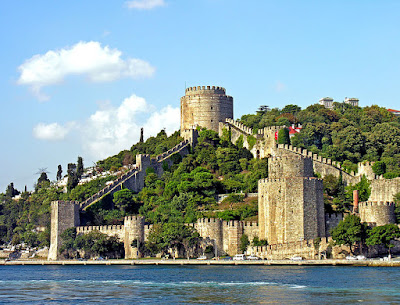 Turkey's location at the crossroads of Europe, Asia, and the Middle East means it has some of the richest and most diverse history anywhere in the world. Constantly fought over, Turkey can also boast hundreds of forts and castles going back thousands of years. Since the main focus of #FortressEarth is to find sites constructed no earlier than 1000 AD (or at least still in use by) this means Byzantine, Seljuk, Ottoman, and modern-era fortifications, as well as sites constructed by Russians and others during various wars. I have been able to find 283 fortified sites and related structures. Given Turkey's complex history and equally complex territory, there are undoubtedly sites I have missed, but I am confident that this map has a majority of them.

The three main sources of information I used to locate these sites were Wikipedia, Wikimapia, and Castles.nl. Roughly 60% were found by me methodically scanning Google Earth.

If you zoom in a little on the map below, some of the interesting things you can discern are the main invasion routes into Anatolia. Groups of fortifications around Istanbul (Constantinople), several defending the Dardanelles to the south, and if you look near the border with Bulgaria, you can find multiple forts defending Edirne. Edirne (Adrianople) served as the Ottoman capital for 90 years before they were finally able to capture Constantinople in 1453. Adrianople has been called the most contested piece of land on earth - having been under siege no fewer than 17 times since 313 AD.

Across the peninsula, in the region near the border with Georgia, you can find the main invasion routes into the region from Russia and Armenia. This area was the site of many large battles. To the south, you see the way defended from invasions coming north from Syria. Finally, you can see the string of castles all along the southern coast which served to defend Anatolia from many foes through the ages.

Based on this map, the interior is unusually empty of castles. I suppose this is due to the fact that while the borders of Byzantium and the Ottoman Empire were constantly under threat, once one side or another conquered the interior, they tended to hold it - making the need for huge numbers of castles generally unnecessary. The ones that do exist protected key cities, regional capitals, and a few important trade routes.


If you know of any places I missed, have any corrections, or other comments, you can either contact me via the links below or simply comment on this article.