I love forts and castles, like, a lot. And I also love maps. So why not make a map of every fort and castle in the world? I set out to do just that several years ago using Google Earth. Such a unique and expansive compilation of these sites doesn't exist anywhere and I am very happy to be putting it together.

My main mapping focus for the past four years has actually been creating the most comprehensive map of North Korea available to the public (you can find out more at MyNorthKorea.Blogspot.com). As that project nears its completion, I have been able to ramp up work on #FortressEarth.

The key objective is to map every extant (including visible ruins) classical fort and castle (that served a legitimate defensive purpose) built between 1000 AD and 1945, or was at least in use by 1000 if it was constructed earlier. There are no firm figures on the total number of such places, but globally it could be as high as 100,000 sites (excluding the huge number of fortifications and bunkers built during World Wars I and II). So I realize this is going to take me longer to finish than the 4 years it has taken to map North Korea (a map with some 50,000 places). But, I have definitely made progress.

Below is a map of every country I have completed. Click on the picture for a larger view. 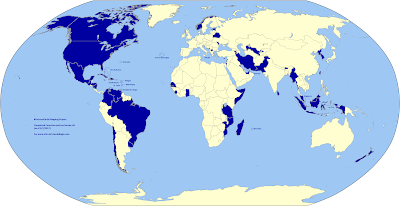 I have finished finding forts in 64 countries and territories. Those 64 countries hold 2,000 sites. I am also very close to being done with Australia, Japan, Portugal, and South Africa. So far, in total, I have mapped nearly 14,000 fortifications. Every country in Europe, and most in Asia and the Americas have at least one fort or castle that fit within my criteria. Within the countries marked "completed", I have found every site I could with a confidence level of 95%. That means it's possible there could be places I missed, but there wouldn't be a large number of them compared to the overall national total.

Of the countries I have completed, the United States actually has the most sites: 433. I was rather shocked when I realized just how many old forts are in the US. One area that may be lacking is the mapping of fortifications built during the Civil War. Because most were hastily prepared earthworks, many have eroded or been destroyed by modern construction. And since this project is about sites that still have visible remains (if they're not fully intact), a good number of Civil War sites may not be included. Of course, as I find the occasional new site, they will be added to the file.

Of the country maps that are not finished, Italy has the most castles, forts, and fortified cities: 3,270 and counting. In terms of the shear number of sites, Italy, France, Germany, and the UK have the largest numbers by far. Outside of Europe, the only other countries that come close are the United States, India, and China (largely thanks to the Great Wall and its many forts).

In order to accomplish this project, I have to use a large number of resources, such as Wikipedia lists (including those in other languages), specialty sites like StarForts.com and the Guide to Japanese Castles, make use of the work Google Earth Community users have done, like Castles of Hungary and English Castle Collection, as well as many other sources such as government surveys. And while all of these resources make my job much easier, they come with errors and are almost never complete by themselves. This means that I spend a lot of time literally zooming around on Google Earth, looking over mile after mile and city after city. 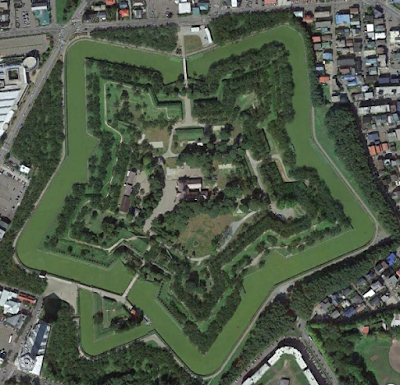 I have also been working on a related side project - mapping star forts. The map (and other info) can be found on my website www.JacobBogle.com/fortress-earth.html. I've been able to find 1,257 of them to-date, which is a list with at least 80% of all star forts in existence.

Once I have finished and published my North Korea map, my focus will be on #FortressEarth. I don't have a clue when it'll be complete - it may never fully be - but it certainly will be fun. If you'd like to help or notice an error/omission in the country files already available (at JacobBogle.com) please feel free to contact me. And if you'd like to engage on Twitter, just use the hashtag #FortressEarth.